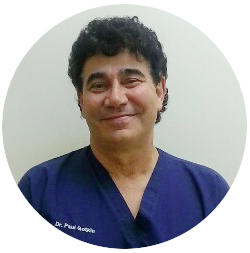 An American and Canadian citizen, graduated from the University of Toronto, St. George Campus, (18th World University ranking 2020 by TIMES HIGHER EDUCATION of 1,396 institutions) with a Bachelor of Science (honors). In 1977, with the highest overall average in Psychology electives, he was invited to perform research at the University of Pennsylvania with world renowned Dr. Martin E.P. Seligman (author of Learned Helplessness and Depression and over 400 research citations and publications).

Treasure Coast Podiatry treated it’s first patient in 1983 at its current location. Dr. Gotkin established the Podiatric out-patient protocol and surgical instrumentation at Coastal Surgical Care (now known as the Cleveland Clinic Out- Patient Surgical Care Center) at a time when bone, joint and tendon procedures were not performed at the facility by Podiatric Surgeons.

Consistent results over decades, soon resulted in surgical referrals from Orthopedic surgeons; then collegial instruction of them and eventually operating on the families of Orthopedic surgeons. With a penchant for research, Dr. Gotkin was appointed the podiatric clinical consultant to Directed Energy Laser Systems (current NASDAQ, DMRC) founded by Leroy V. Sutter, PhD (M.I.T. Laser Physics).

Throughout the years Dr. Paul Gotkin has been featured on local ABC, NBC, CBS and affiliates for techniques in foot surgery.

In addition to Foot and Ankle Surgical Board Certification by the American College of Foot and Ankle surgeons, Dr. Gotkin became the second podiatrist IN THE WORLD to be board certified by the American Board of Laser Surgery. The board was established by Dr. John C. Fisher (SCD Harvard University), enabling the standardization of credentials in laser physics and safety. Less than five hundred medical professionals in all specialties worldwide are certified by this board. “Both Lee (Dr.Sutter) and Marty (Dr.Seligman) ostensibly geniuses, facilitated my interest in research, academia and instruction.” Dr. Gotkin has served as an adjunct instructor in the Surgery Department (Barry University), authored multiple surgical and laser research papers and served in the capacity of examiner for the American Board of Laser Surgery.

Dr. Gotkin and his wife Ena, married since 1982, have enabled their adult children Joel and Leeza (both certified members of Mensa) to appreciate the intrinsic value of professional education. Dr. Gotkin, concerned with the “irreversible tipping point of the planet carbon footprint and the plastic pollution of our biosphere”, has travelled to Africa and the Galapagos archipelago.

A former right-wing hockey forward, he was involved in organized amateur hockey leagues in Canada and the USA. He was also a 4.5 – Open level Tennis and 2,000+ rated Table Tennis player. He has treated numerous world ranked Tennis and Table Tennis players. As a former accomplished Racquet Sports player and surgeon, he has a unique understanding of the biomechanical demands and stresses imparted by racquet sports on the feet and ankles of athletes from amateur to the world class level.

Diplomate, American Board of Foot and Ankle Surgery