We at Treasure Coast Podiatry Centre have specialized pediatric foot services to treat many of the common issues with children’s feet. Some common things we treat are:

Athlete’s foot is very common in children and is a skin infection caused by fungus. A fungal infection may occur on any part of the body; on the foot it is called athlete’s foot, or tinea pedis. Fungus commonly attacks the feet because it thrives in a dark, moist, warm environment such as a shoe.

Fungal infections are more common in warm weather when feet tend to sweat more. Fungus thrives in damp areas such as swimming pools, showers, and locker rooms. Athletes commonly have sweaty feet and use the facilities where fungus is commonly found, thus the term “athlete’s foot.”

Athlete’s foot usually produces itchy, dry, scaling skin. It is commonly seen on the soles of the feet and in between the toes. In advanced cases, inflammation, cracks, and blisters may form; an infection caused by bacteria can also result. The fungus can spread to other areas of the body, including toenails.

Avoiding walking barefoot combined with good foot hygiene can help reduce the spread of the fungus. Feet should be washed every day with soap and water and thoroughly dried, including between the toes. Feet should be kept as dry as possible. If your feet sweat a lot you may need to change your socks during the day. Anti-fungal powders, sprays, and/or creams are often utilized to treat athlete’s foot. Your foot and ankle surgeon will recommend the best treatment for you.

Pediatric Flatfoot is the partial or total collapse of the arch. Flatfoot can be apparent at birth or it may not show up until years later. Most children with flatfoot have no symptoms, but some have one or more of the following symptoms:

Pain, tenderness, or cramping in the foot, leg, and knee

Outward tilting of the heel

Awkwardness or changes in walking 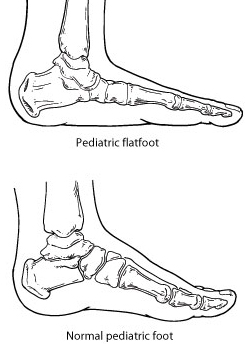 If a child has no symptoms, treatment is often not required. Instead, the condition will be observed and re-evaluated periodically by the foot and ankle surgeon. Custom orthotic devices may be considered for some cases of asymptomatic flatfoot.

When the child has symptoms, treatment is required. The foot and ankle surgeon may select one or more of the following non-surgical approaches:
9

The child needs to temporarily decrease activities that bring pain as well as avoid prolonged walking or standing.
9

The foot and ankle surgeon can provide custom orthotic devices that fit inside the shoe to support the structure of the foot and improve function.
9

Stretching exercises, supervised by the foot and ankle surgeon or a physical therapist, provide relief in some cases of flatfoot.
9

Nonsteroidal anti-inflammatory drugs (NSAIDs), such as ibuprofen, may be recommended to help reduce pain and inflammation.
9

The foot and ankle surgeon will advise you on footwear characteristics that are important for the child with flatfoot.
In some cases, surgery is necessary to relieve the symptoms and improve foot function. The surgical procedure or combination of procedures selected for your child will depend on his or her type of flatfoot and degree of deformity.

When a toenail is ingrown, it is curved and grows into the skin, usually at the nail borders (the sides of the nail). This “digging in” of the nail irritates the skin, often creating pain, redness, swelling, and warmth in the toe.

If an ingrown nail causes a break in the skin, bacteria may enter and cause an infection in the area, which is often marked by drainage and a foul odor. However, even if the toe isn’t painful, red, swollen, or warm, a nail that curves downward into the skin can progress to an infection

After examining the toe, the foot and ankle surgeon will select the treatment best suited for your child. If an infection is present, an oral antibiotic may be prescribed.

Sometimes a minor surgical procedure, often performed in the office, will ease the pain and remove the offending nail. After applying a local anesthetic, the doctor removes part of the nail’s side border. Some nails may become ingrown again, requiring removal of the nail root.

Following the nail procedure, a light bandage will be applied. Most people experience very little pain after surgery and may resume normal activity the next day. If your surgeon has prescribed an oral antibiotic, be sure to take all the medication, even if your symptoms have improved.

Plantar warts often occur in children and are a small growth on the skin that develops when the skin is infected by the human papilloma virus (HPV). Warts can develop anywhere on the foot, but typically they appear on the bottom (plantar side) of the foot.
There are two types of plantar warts:
9
A solitary wart is a single wart. It often increases in size and may eventually multiply, forming additional “satellite” warts.
9
Mosaic warts are a cluster of several small warts growing closely together in one area. Mosaic warts are more difficult to treat than solitary warts.

Although plantar warts may eventually clear up on their own, most patients desire faster relief. The goal of treatment is to completely remove the wart. The foot and ankle surgeon may use topical or oral treatments, laser therapy, cryotherapy (freezing), acid treatments, or surgery to remove the wart.

Although there are many folk remedies for warts, patients should be aware that these remain unproven and may be dangerous. Patients should never try to remove warts themselves. This can do more harm than good.

When children experience heel pain with no apparent reason, this is often Sever’s Disease. The name is often misleading because it’s not an actual disease but caused when a growth plate in the lower back of the heel becomes inflamed and causes pain. It’s very common in children who play sports or exercise on a regular basis.

There are several ways to treat Sever’s Disease depending on the severity. Often, over the counter pain medication such as acetaminophen or ibuprofen is all that is needed. Sometimes orthotics are used such as gel cups for the heels or supportive inserts for shoes. Physical therapy can also be undertaken to stretch and strengthen parts of the foot. In severe cases, a short cast can be put on for a week or two if symptoms don’t go away with other treatments.

Toe walking, a condition in which a person walks on the toes or ball of the foot, is most often seen in young children learning to walk. A child who does not outgrow toe walking in early childhood should be evaluated by a foot and ankle surgeon. Toe walking may be idiopathic (habitual) or it can be caused by a shortened Achilles tendon (equinus deformity) often associated with a neurological or muscular disorder.